March 15th marks the International Day Against Police Brutality. Many events were held worldwide, and for the second year in a row, 250+ people were detained in Montreal.

A local activist described the event:

The anti police brutality march in Montreal was kettled before it even started and all participants arrested. The SPVM (municipal police) had a massive PR blitz yesterday in advance if the whole deal in order to prejudice media from the beginning and letting them know they wouldn’t be allowed to film. Strangely enough some journalists from mainstream media didn’t believe them and got roughed up. A local indie media group was the only one to get images by filming from a residential rooftop after asking permission from the occupants. The cops still tried to intimidate the residents by asking if they “really were sure” they had given permission.

The International Day Against Police Brutality occurs on March 15. It first began in 1997 as an initiative of the Montreal based Collective Opposed to Police Brutality and the Black Flag group in Switzerland. In Montreal, a march is usually held which defies law P6 by not declaring its itinerary to police. In 18 years the march has only avoided arrests and hassling twice. The protest is immediately declared illegal and crackdown begins shortly after the protesters have gathered. Hundreds of people are arrested most years. The police use kettling, batons and are dressed in riot gear (wiki).

In Seattle, activists took to the streets to protest Police Brutality, no arrests were reported. More pictures available here.

Anons in Yakima, WA protested outside of the local police department, and reportedly had some words with the local Police Department.

Activists in Kansas City held an event at 31st and Main, and held signs that commemorated victims of police brutality in the area. They gained the support of the fire department – who honked and turned on sirens – for representing Anthony Bruno, a firefighter who was murdered on his wedding night by police.

In Copenhagen, Denmark activists had a very colorful demonstration, as they played loud music and danced in the streets.

Activists in Hamilton, a port city in the Canadian province of Ontario, marched as well. “There have been five people who have been killed over non-violent crime in four years under the administration of Chief Glenn De Caire,” said Warrand Francis, 54. 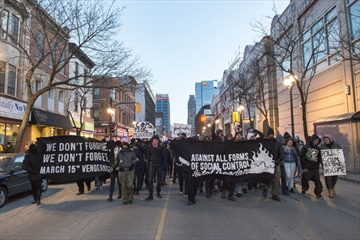 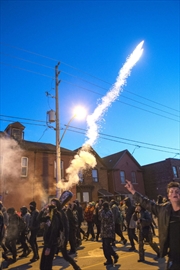 Many other events took place as well, in cities such as Oakland, Fullerton, Baltimore, and Melbourne. Clearly, the international day against police brutality has become a tradition that shows no signs of stopping. It’s no wonder, when statistics show that police have killed over 5000 people in the US alone since 9/11.

March 15 reportbacks from Oakland and Portland (2013)

Posted on October 7, 2013 by March Fifteenth

Report Back on the March 15th demonstration in Oakland

Let us begin by expressing our solidarity to the 250+ who were arrested in Montréal during the 15 Mars Manifestation Contre la Brutalité Policiére.

At 9:00 PM, a small group of anarchists that numbered around two or three dozen took the streets, with black flags and banners that read “FIGHT B(A)CK” and “Anti-Capitalist Anti-Police.” We marched south on Broadway, chanting “Anticapitalista,” “No Justice No Peace Fuck the Police,” and “All Cops Are Bastards ACAB.” We made our way down to the OPD station at 7th & Broadway, where we confronted maybe ten riot police. The cops appeared to be on the defensive, so after a few minutes we made our way north on Franklin. “FTP” was written with impressively large font across a Chase bank, and some of it’s windows were broken. Multiple ATMs along Franklin were vandalized, Oakland Tribune had some of it’s windows shattered. Union Bank had it’s front door smashed, Some windows on the Bank of California were broken. But this is an incomplete list of actions we’re sure. As we passed the park at 19th & Telegraph, we decided it was a good time to disperse as many police cars were speeding around the area. There were no arrests as far as we know.

We would like to thank the comrades who showed up, the NLG for lending us a legal observer. Much love and solidarity to everyone who demonstrates against the system, today or any day.

Reportback from Portland March 15th Day of action against Police

Last night a group of about 75 people assembled and left Holladay park. Oddly we left a good 15 minutes before the march was supposed to start, making us wonder who might have showed after we left. Many of us wanted to take the street but were dogged in by the absurd amounts of police on bikes following us on the other side of the street, and the horse/riot cops just out sight. Marching downtown chanting: “Police are the army of rich”, “Portland, Cairo, Greece, Fuck the Police”, “Fuck These Cops we don’t need them, what we want is total freedom”. People from the bars and cars cheered in support, yelling “Fuck the Police” back at us. It was refreshing to see many faces I’ve never seen, and surprisingly many who I thought would be there, weren’t, but hell new is good. Many of the younger folks were thrilled and had never been to such an anti-capitalist/anti-police demo, saying how exciting it was. All and all it wasn’t as raucous as some would like, no attacks and little amount of street taking. But before trollers call us posers, we had incredible amount of support from people on the periphery, even inspiring younger people in our own ranks I hope will build on this momentum. Also there were an army of police. Hope to see more people and less police next time. Thank you Oakland for keeping it fierce, and thanks to the comrades arrested in mass in Montreal. Fuck the police. Fuck the Capitalist order they enforce.
(A)

On the evening of March 15 (international day against police brutality) in Montreal, although riot pigs were all over, they clearly lost control of the city center for several hours.

Already in the afternoon, the Berri-UQAM station was filled with riot cops inside and outside, the sky with helicopters, patrols of pigs in the streets and later riot squads and horsemen. Even with this display of force they weren’t up to the task. Proof that here as elsewhere revolt is more than possible. We can even thank in part the cops on Thursday for the riot, they fed it and gave it strength.

They gave it strength when they charged on the demo of a few thousand people on Sherbrooke after twenty minutes of sloganeering and anti-cop graffiti, which resulted in several pacifist hippie parasites and the self described students with the bourgeois leftist mentality to go home. The ones who wanted more than to take a walk wondering what the fuck they were doing in another pathetic ritual of slogans, divided into smaller mobile groups that dispersed and reformed to fuck shit up all night long.

The cops also fueled it when they attacked the people downtown with their arsenal, on St-Catherine street. From then on the rage was unleashed on the streets. There were probably also many bored young people who are regularly targets of profiling and saw there a great opportunity for their turn to piss on the cops and it wasn’t to long for it to come. As this same line of cops was advancing they took a volley of stones, bottles and a molotov and in an attempt to block the road further, the riot pigs fled from the crowd coming on each side. Moments later, while bins were flying down the street and into a few shop windows, the crowd fell on a brand new cop car, pigs included. The car was attacked with projectiles and you could see the terror and panic in the face of the two cops as they fled the crowd charging on the car. Later a vandalized cop car was flipped over.

By late evening a crowd gathered again at the Berri Square, where it had all begun, to leave once again. It’s when the crowd dispersed to Maisonneuve and Ontario that the cops surrounded people on the sidewalk to make a mass arrest. They held the crowd of about 200 people surrounded for several hours and then filled some buses and took them to a police station in Langelier, far from downtown, where they proceeded to identify people and give them tickets for “gathering endangering peace” and release them, but not before having photographed them one-by-one. There was also during the day and evening several random arrests and others targeted.

March 15th is every day!
The hatred of this rotten world and its cops, we carry it every day!

Posted in General | Comments Off on Montreal: March 15th Fucks the Cops